And the rockets’ red glare 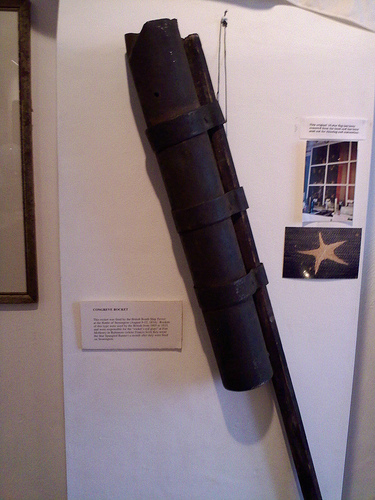 Today being Independence Day in the United States I’ve no doubt that the national anthem will be played over and over again.

I actually found out at the Smithsonian that the words of ‘The Star-Spangled Banner’ were written by a ‘hostage’ who witnessed the event from the British side’s viewpoint. He only knew as dawn broke the following day that the flag still flew.

“And the star-spangled banner in triumph shall wave
O’er the land of the free and the home of the brave!”

It was the use of Congreve rockets by the British in the bombardment of Fort McHenry in the US in 1814 that inspired that famous fifth line of the first verse of the ‘The Star-Spangled Banner.

“…And the rockets’ red glare, the bombs bursting in air…”

HMS Erebus fired the rockets from a 32-pound rocket battery installed below the main deck, it’s sister ship HMS Meteor providing some of the mortar barrage – ‘the bombs bursting in air’.

Had Francis Scott Key not been held hostage for a few hours – if he had been behind the lines during the assault we may never have got to hear those famous words as the very rockets and bombs he subsequently wrote about may well have killed him.

All I can say is thank goodness because personally speaking I have to say ‘The Star-Spangled Banner’ is far better than ‘Hail, Columbia’

If you want to know more about what goes on in the chemical soup that I call a brain then have a trawl through my blog where my life to a degree is unveiled. Enjoy my life - I'm trying to. Rob
View all posts by Rob →
This entry was posted in My Ramblings and tagged Francis Scott Key, Independence Day, life, Star-Spangled Banner. Bookmark the permalink.

1 Response to And the rockets’ red glare